With Saint Joseph as our sponsor, guide, and foster-father, the Sons of Saint Joseph are Christian men who hope to overcome all same-sex attractions and any persistent attachments to the homosexual or the “gay” orientation. This will be accomplished through: frequent reception of the Sacraments, daily prayer, spiritual direction, self-sacrifice, corporal and spiritual works of mercy, professional counseling, and by developing the virtues of prudence, temperance, and courage. In doing so, we wish to further our own personal relationship with Jesus Christ, and, as a consequence, become living examples for our brothers who are still trapped within the homosexual lifestyle and within the false “gay” orientation. 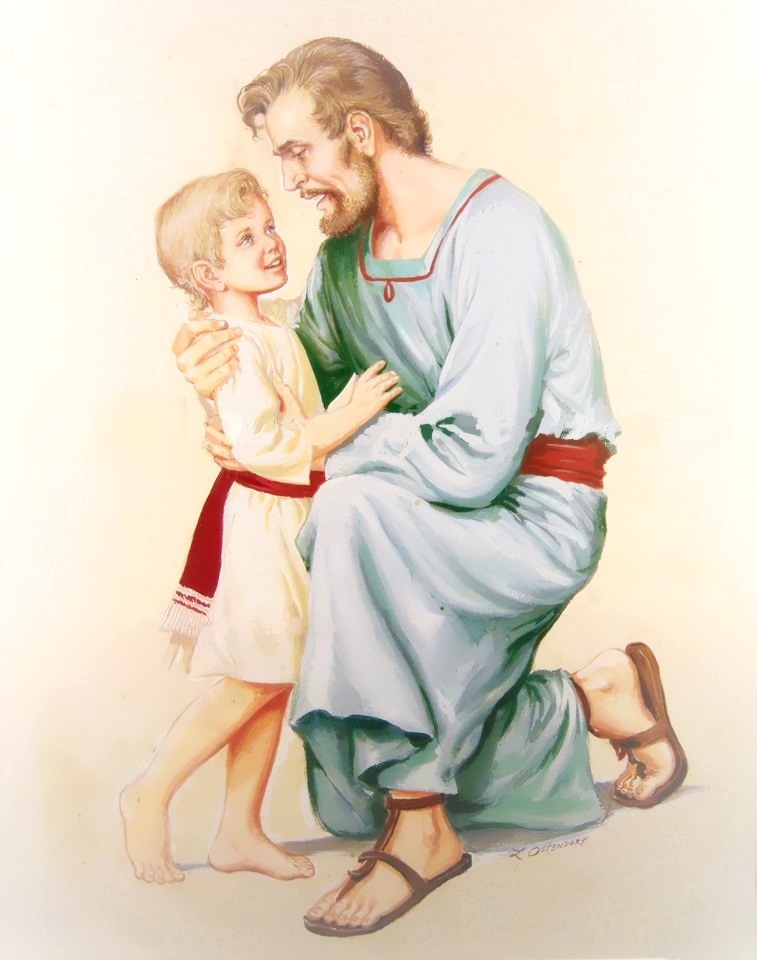 Oh St. Joseph whose protection is so great, so strong, so prompt before the Throne of God, I place in you all my interests and desires.

Oh St. Joseph do assist me by your powerful intercession and obtain for me from your Divine Son all spiritual blessings through Jesus Christ, Our Lord; so that having engage here below your Heavenly power I may offer my Thanksgiving and Homage to the Loving of Fathers.

Oh St. Joseph, I never weary contemplating you and Jesus asleep in your arms. I dare not approach while He reposes near your heart.

Press Him in my name and kiss His fine Head or me, and ask Him to return the kiss when I draw my dying breath.

St. Joseph, Patron of departing souls, pray for us.
Amen

Saint Joseph, model of manly strength, obedience, and chastity
Just as you defended and sheltered the child Jesus
Who God the Father so rightly placed in your loving care
I ask you to be my foster-father and protector.
Joseph most strong,
I humbly implore you to pray for my intentions:
That, with your help, I may embody the teachings of Christ
That I will always remain pure in body, mind, and spirit,
And that I will have the strength to heal from the pains of childhood
And from those wounds I inflicted upon myself.
Deliver us from all same-sex attraction
And make us the whole men that we were born to be.
Joseph most just,
Joseph most chaste,
Joseph most prudent,
Solace of the wretched,
Hope of the sick,
Terror of demons,
Pray for me.
Amen.

Should I refer to myself as “gay” or as a “gay Christian” or a “gay Catholic?”

It is better, when asked, or when giving testimony, to describe yourself as a Orthodox, Christian, or a Catholic man who experiences (or experienced in the past) “same-sex attraction.” To self-identify as “gay,” no matter the intentions of your heart, is to publicly align oneself with a socially and historically charged word: in the past, “gay” simply meant happy or joyful; since the acquisition of the word by the modern homosexual movement, “gay” is identified with such things as “gay” sex, “gay” marriage, and “gay” porn. Therefore, to identify as “gay” or LGBTQ is to bind ourselves to both a cultural and political movement that is essentially anti-truth. Fr. Thomas Hopko in his book “Christian Faith and Same-Sex Attraction,” wrote:

“While sexuality that may be expressed in properly ordered heterosexual feelings and actions is an essential element in human being and life, sexual desires for carnal relations with persons of one’s own sex are not a part of a person’s basic sexual identity as a human being…all men and women, whatever their sexual feelings, proper and improper, are human beings who cannot be essentially defined in their God-given humanity by their feelings and desires—feelings and desires that have been produced in them by their biological, psychological, and cultural inheritance, and by the way they have been treated by others, particularly their parents and family members, within the corrupted conditions of the fallen world.”

Do I have to become straight?

Metropolitan of Nafpaktos Hierotheos, in his book “Orthodox Therapy: The Science of the Fathers,” wrote:

“…in order to be cured it is essential to feel that one is ill. When someone who is sick is not aware of his illness, he cannot turn to a doctor. Self-knowledge is one of the first steps to a cure. St. Maximus teaches: ‘The one who has come to know the weakness of human nature has gained experience of divine power,’ and he is eager to achieve some things and has achieved other things through this divine power.”

In 1973, the American Psychiatric Association declassified homosexuality as a mental disorder. The American Psychological Association Council of Representatives followed in 1975. Thereafter other major mental health organizations followed, including the World Health Organization in 1990. Yet, before and since, evidence continues to determine that homosexuality is indeed a mental illness. The way in which most contemporary researches get around this fact is by blaming the high rates of psychiatric morbidity in homosexuals to social and cultural homophobia, internalized homophobia, and overall that homosexuality and mental illnesses are unrelated with the unusual rates of serious psychological conditions seen in homosexuals as “possibly linked with discrimination.” Only, this supposition is categorically false, for in the Netherlands, the first country in the world to legalize same-sex marriage, in particular, gay men continue to exhibit a plethora of various mental disorders.*

Part and parcel along with any authentic program of healing from same-sex attraction, there must be at least a cursory examination of any childhood trauma, neglect, or abuse that was experienced by the person now dealing with same-sex attraction. Because some have survived particularly intense or violent abuse as children, professional therapy is highly advised; others, with a different story, perhaps therapy is not as necessary. Here, it is not that mental illness causes homosexuality, but that the oftentimes extreme difficulties which some men experienced as children, who later become same-sex attracted, will eventually exhibit various mental illnesses because homosexuality never fully resolves the unattended wounds; Dr. Joseph Nicolosi put it this way: homosexuality is a “symptomatic failure to integrate self-identity. Symptoms will always emerge to indicate its incompatibility with a man’s true nature.” Ultimately, the decision to seek therapy is up to the individual; although it is possible, outside of a clinical environment, to naturally experience a diminishing of same-sex desires, and, henceforth, to witness an increase in attraction towards the opposite sex. Reparative therapy, while extremely beneficial to many, is not for everyone.

“Of the 1285 gay, lesbian and bisexual respondents who took part, 556 (43%) had mental disorder as defined by the revised Clinical Interview Schedule (CIS-R). Out of the whole sample, 361 (31%) had attempted suicide…Gay, lesbian and bisexual men and women have high levels of mental disorder…”
“Rates and predictors of mental illness in gay men, lesbians and bisexual men and women
Results from a survey based in England and Wales”
James Warner, et al.
British Journal of Psychiatry (2004), 185, 479-485.

“Gay/lesbian and bisexual respondents had higher levels of psychopathology than heterosexuals across all outcomes. Gay/lesbian respondents had higher odds of exposure to child abuse and housing adversity, and bisexual respondents had higher odds of exposure to child abuse, housing adversity, and intimate partner violence, than heterosexuals. Greater exposure to these adversities explained between 10 and 20% of the relative excess of suicidality, depression, tobacco use, and symptoms of alcohol and drug abuse among LGB youths compared to heterosexuals. Exposure to victimization and adversity experiences in childhood and adolescence significantly mediated the association of both gay/lesbian and bisexual orientation with suicidality, depressive symptoms, tobacco use, and alcohol abuse.”
“Disproportionate exposure to early-life adversity and sexual orientation disparities in psychiatric morbidity.”
McLaughlin KA, et al.
Child Abuse Negl. 2012 Sep;36(9):645-55.

Secondly, one must remove the source of temptation; if you were an alcoholic you would not keep liquor in your house? Therefore, if you are addicted to porn, you do not want any internet access within your reach. This will be difficult in the age of social media, but it’s a necessity; this is particularly important because the majority of men self-abuse with pornography in the evening while at home. During those hours, keeps busy: go out with friends, find a good spiritual work to read, devout a certain amount of time to prayer; when the temptation is exceptionally strong: reach out to a trusted friend, if there is a Perpetual Adoration chapel in your area – go there; whatever you do – stay away from the computer.

Why should I look towards Saint Joseph as a model of true masculinity?

Saint Joseph was a man of few words; in fact, none are recorded in Holy Scripture. But, he was a man of action. Only, Joseph did not represent a sort of boastful or egotistical type of false masculinity, but he was of a subtle and deliberate nature which always remained in supplication to the Will of God. When God spoke, Joseph listened. Like his Old Testament namesake, Joseph was a dreamer. Yet, he never indulged in a lethargic form of self-centered star-gazing, but kept vigilant in his conscious openness to every whisper emanating from the mind of the Father. According to St. Ephrem, one of the Eastern Fathers of the Church, St. Joseph once said: “Who has made me worthy of so tremendous an honor that the Son of the Most High should be a son to me? David my forefather bore a diadem, but I, thrown down from that honor, have come upon utmost contempt; and him whom lineage destined to be a king chance has made a carpenter. But now the crown that was snatched away has returned after Thou, the King of kings, hast come into my arms.”

The LGBT War Against Orthodoxy: My Conversation with Fr. John Whiteford

Read More
Comments Off on The LGBT War Against Orthodoxy: My Conversation with Fr. John Whiteford

In order to save my life, God sent me the one saint who perfectly exemplified the human attributes that I most feared: FatherhoodMasculinityStrengthBraveryFortitude For as long as I could remember – I yearned to embody

…there but for the grace of God go I.

I never thought I’d be one of those people. I grew up in the North Bay – that largely agricultural, suburban, and affluent section of the San Francisco metro-area that comprises Marin, Sonoma, and Napa

Give me the strength to seek you; Oh, you who allowed me to find you, and who gave me the hope of finding you more and more. – Saint Augustine For much of my life,

Conversion, Coming Home, and Hope in a Time of Chaos

Much of my life was chaotic. But it wasn’t always so. At home, as a child, before I became exposed to the wider world, I often felt safe and loved. Yet, almost immediately, in school,

A Good Father Tells the Truth

Above: Eugène Burnand, "The Prodigal Son" (1908) My dad was a good father. I didn’t always think so. When I was a kid, I thought he ignored me; he paid more attention to his work,